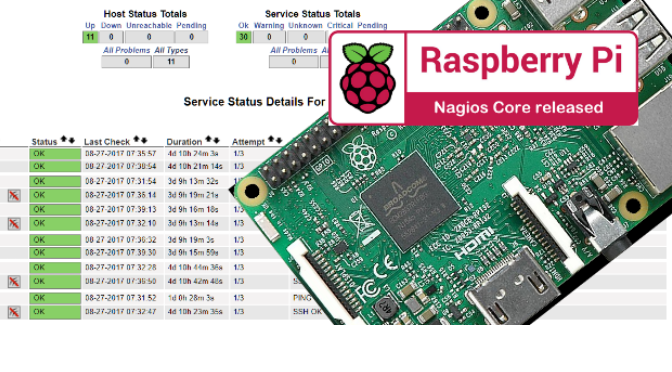 How to Install Nagios on Raspberry Pi

Nagios consists of a collection of modules for monitoring networks, hosts and their specific services, as well as a web interface to display queries of the collected data. Nagios is under the GNU GPL, so it is free software and runs on numerous Unixoid operating systems. Because of its widespread use, Nagios has become a quasi-standard in professional use.

, well suited as a single-board computer for a Nagios monitoring server that can even monitor itself.

The installation of Nagios Core 4 on the Raspberry’s own OS Raspbian, which is based on Debian, is unspectacular. Here in these instructions the procedure for a Raspberry Pi 3 Model B is shown, on a 32 GB microSD card type Class 10, a 16 GB microSD card would also suffice. 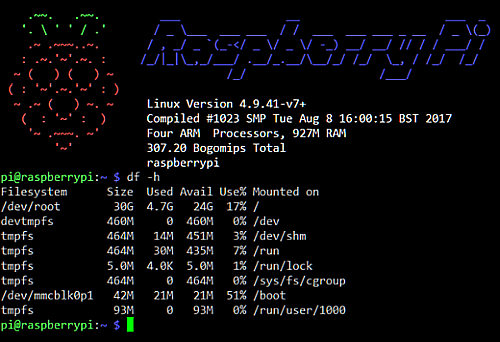 The provision of Raspbian on a microSD card is not discussed here in more detail. After booting a Raspbian desktop image, the LXTerminal is opened on the Raspbian X desktop and the root shell is started, in headless operation a VNC session can be started with VNCViewer, with the login as user pi and the default password raspberry. If you want to use the Raspbian Minimal Image, authentication via SSH to the Raspberry Pi is recommended. 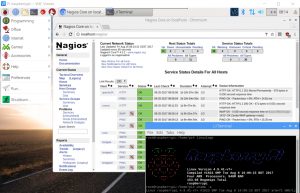 After logging in as user pi, we want to become root.

First, all required packages are installed from the repository as a prerequisite.

Download and unzip the Nagios Core 4 source packages. The last release can be found here The core release as well as the agents and plugins are available on Github,

Create the user nagios and the group. The Apache user www-data is also added to the nagios group.

Installing the service daemon files and configuring them for the boot process.

Apache web server configuration files are installed and the Apache settings for Nagios are configured.

Port 80 must be permitted for incoming data traffic on the local firewall so that the Nagios Core web interface can be reached.

Answer yes to save the existing rules.

The Apache web server must be restarted.

Nagios is now ready to be tested.

You will be asked to log in with your user name and password. The username is nagiosadmin (you created it in a previous step) and the password is what you provided earlier.

After successfully logging in, the Nagios Core web interface appears. Congratulations, you did it.

Nagios Core is now installed, the Nagios plugins are still required for operation. The error message appears: (No output on stdout) stderr: execvp(/usr/local/nagios/libexec/check_load .. this is normal, the standard plugins are installed in the following steps.

The following packages are installed from the repository as a prerequisite for installing the plugins.

Download and extract the source packages. The last plugin releases can get from nagios-plugins.org.

Go to a host or service object and “Re-schedule the next check” in the Commands menu. The error that appeared before should now disappear and the correct output is displayed on the screen.

If it is to be more structured, there is the possibility to save the host and service configuration in the directories printers, routers, servers, switches, for this the file nagios.cfg is edited and the comment characters # (hash) are removed accordingly in cfg_dir =.

The .cfg files created in the directories are read out.

Example for a mail and web server with this IMAP and HTTPS is checked.

The Nagios server is restarted after each change.

A look at the Nagios log file can be worthwhile.

Additional configuration examples for Linux, Windows, printer routers and switches can be found under the objects directory.

In the file nagios.cfg and objects/contacts.cfg the recipient email  root@localhost can be left.

Postfix is ​​used here as the mail transport agent for the Nagios email notification. This is installed and configured as follows.

During the installation you will be asked to select a mail server configuration, here we select Internet Site.

In order to be able to test the sending of emails later, the package mailutils is installed.

Set up an email address for root by editing the aliases file.

At the end a valid email address is entered so that mails from this host are delivered, here as an example it is helpdesk@banana.org, the colon for root: is mandatory.

The changes in the aliases file must still generate the aliases.db file.

The Postfix configuration also has to be read in and activated.

Now sending emails from Raspberry Pi, this can be done as follows.

An email should now be in the inbox of helpdesk@banana.org.

If the attempt to send returns the status=bounced, receipt on the mailer is not yet authorized. With Exchange, the IP address of the Raspberry Pi must be entered in the receive connector in the frontend transport under area definition for email received from servers with these remote IP addresses. For Postfix a smtpd_client_restrictions directive must exist in main.cf.

client_access file contains the IP address of the Raspberry Pi.

If the SMTP requests are accepted by the mailer, the queue process and delivery can take place.

last but not least

If all of this is too complicated, or the required time is not available, the finished Raspberry Pi Box can be obtained here.

Fully initialized and ready to rock!