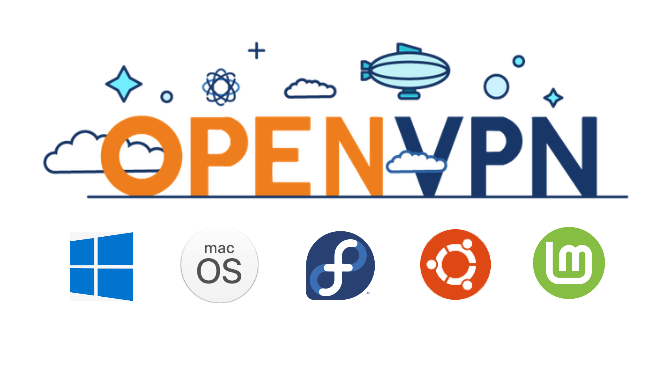 Setting Up and customize OpenVPN on Windows, macOS and Linux

VPN (Virtual Private Network) is becoming more and more widely used. OpenVPN is a free application for building a virtual private network over an encrypted TLS connection. The increasingly popular OpenVPN client enables VPN connections to access its data from anywhere, for example, when working in the home office, or with a private cloud.

This article shows the client deployment and use of OpenVPN. OpenVPN is available for free for many operating systems, in addition to Windows there is a client for macOS, for iOS, Linux and Android devices.

OpenVPN for Windows can be downloaded from the community website here, on Windows 10 with double-clicking OpenVPN-2.5.0-I601-amd64.msi start the setup.

Choose Customize to goes through the setup wizard, because here only the client components are needed, we choose the selection.

A glance at the taskbar shows now the OpenVPN icon

OVPN configuration import at the client

The OpenVPN Access Server is available for Windows, Linux and FreeBSD, and there are an increasing number of devices that can be used as OpenVPN servers, such as pfSense and OPNsense or OpenWrt, from commercial manufacturer like Sophos formerly Astaro or Synology NAS and many more.

The file with the configuration for the client, such as openvpn.zip, which was previously exported on the VPN server or router need to unpacked, the files ca.crt, README.txt and VPNConfig.ovpn are usually extracted.

The configuration file here in this example VPNConfig.ovpn may have a different file name. Hint! if you change the file name to i.e. office-davos.ovpn, then this name appears in the context menu at connection.

The file VPNConfig.ovpn usually has to be open in an editor, for this I use Notepad and change YOUR_SERVER_IP to the public IP address of the VPN gateway, or the firewall on which is the NAT mapping to the VPN termination device.

After saving VPNConfig.ovpn, the configuration is imported.

Right-clicking above the icon

in the Systemtry opens the context menu from which you choose to import file.

Tip! If you rename the file VPNConfig.ovpn eg. Home-Office.ovpn, the corresponding name appears as the target in the Connect context menu.

If the connection is successful, the OpenVPN icon will appear green.

With the standard installation, OpenVPN is usually already installed together with the network management tools, in this case you can go directly to Import OVPN configuration file below. The easiest way to deploy the OpenVPN client using the package management system is to run the following commands as root on a Red Hat based Linux distribution such as Fedora or CentOS:

Install the OpenVPN on Debian and Ubuntu based distributions as follows:

The configuration file here in this example VPNConfig.ovpn may have a different file name. Hint! if you change the file name to i.e. office-davos.ovpn, then this name appears in the context menu at connection

The connection can also be established via a GUI client, to install the OpenVPN GUI from the shell:

Now you can call the Connection Manager by clicking on the network icon – VPN Connections – Configuring VPN.

By clicking on Add – Import Saved VPN Configuration – Create a new VPN connection. The next step is to import the previously downloaded VPNConfig.ovpn file. The connection can now be started from the taskbar.

For Linux Mint with Cinnamon desktop, you click on the network icon in the taskbar and go to network settings.

Import saved VPN configuration from the VPNConfig.ovpn file. After entering the user and password, the saved connection can be started in the taskbar.

Import the OVPN file via the Network Manager of Linux Mint and Cinnamon Desktop.