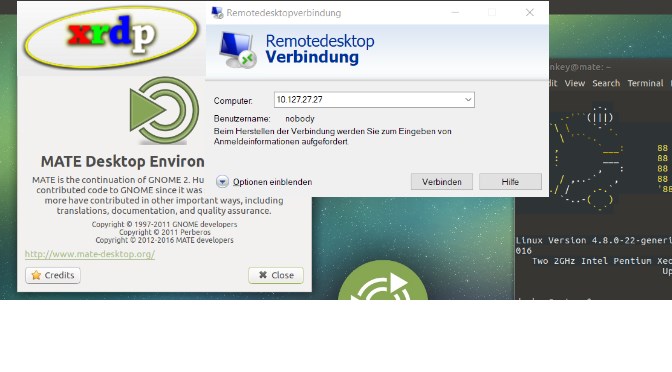 How To use xrdp on Ubuntu

xrdp allows windows users graphically access to Linux systems just as easily as other Windows machines, and ideally with one and the same application, like mstsc.exe, the Windows Remote Desktop Client.

xrdp is an open source implementation of the remote desktop protocol that Windows Terminal Services (RDS) use to connect to Windows desktops. The xrdp package brings the RDP protocol to the Linux computer by providing an X server that accepts connections from the Windows terminal server clients (mstsc).

The xrdp server can be set up with the packet manager apt-get and yum or dnf for corresponding Linux distribution. On Ubuntu lets run sudo apt-get install xrdp

These are steps to build and install xrdp from neutrinolabs Git repository. The build process described here on Ubuntu 17.10 (Artful Aardvark).

How to Install xrdp

First the Linux system is prepared, here it is Ubuntu Mate 17.10, the dependencies are installed: (all on one line)

Get the source packages from Github sources:

Create and install from xorgxrdp:

Xrdp can also be installed from Github Source. Build with Git clone:

The configuration can be adjusted if necessary:

The remote desktop connection to the Linux xrdp server can now be established:

Since Xorg X11 is no longer started as root, change the X11/Xwrapper from console to anybody.

This can also be done with the use of dpkg utility.

The alternative desktop environment must first be installed, here at fedora.

If RDP session is aborted or frozen, allow_channels = true can be set to false.

SELinux can be deactivated for test purposes.

If the firewall rejects the RDP port, the port must be allowed for RDP.

A black screen appears after logging in, followed by an error message:

It helps to create a new user, then log in with him via RDP.

Generating a new certificate can also be useful.

Activate the certificate in the xrdp configuration /etc/xrdp/xrdp.ini.