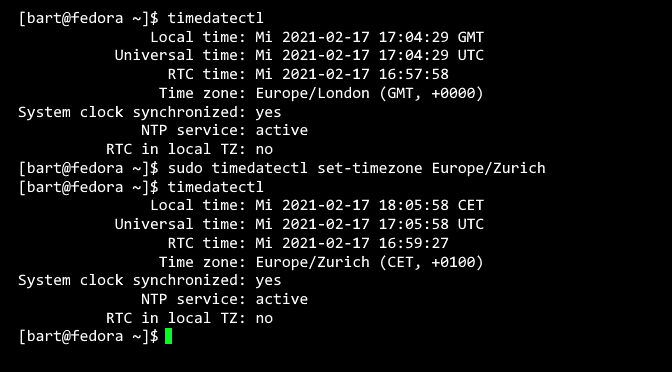 This post shows the synchronization of the system time with the atomic time of the NTP server in the Linux command line. Proper system time is essential for computer systems and creates the prerequisite for a smooth boost to the interacting services. The following command-line tools are used to check and adjust system time.

To querying the current system time with date and timedatectl:

The time synchronization on a server is carried out by an NTP daemon to synchronize the system time and ensure that the systems function properly. Atomic time can be synchronized by NTP servers on the Internet, such as Google Public Network Time Protocol (NTP) time.google.com

NTP Pool Server pool.ntp.org tries to find the closest available server. The NTP pool project is a dynamic pool of time servers. The NTP pool servers can be edited in /etc/ntp.conf.

Before the ntpd service can be started, the system time must be set manually (in the range of a few minutes). This can be done with hit date or here run timedatectl set-time or via the NTP pool with ntpdate pool.ntp.org

Now run the NTP daemon and link it in systemd for automatic start:

The systemd-timesyncd service is already installed on many distributions. The configuration files control the time synchronization of the NTP network.

The network time synchronization for the systemd-timesyncd service includes the file /etc/systemd/timesyncd.conf

The timesyncd.conf configuration file can be as follows.

use NTP servers that are in your zone for local time synchronization, see pool.ntp.org

So that systemd-timesyncd is started automatically, the command enable the service accordingly:

With a systemd-based system, run the following command to check the service status:

Kerberos authentication is currently the standard authentication technology under Windows; Apple macOS, FreeBSD and Linux systems also use Kerberos implementations. When authenticating in an environment using Kerberos, a synchronous system time is of fundamental importance for interacting systems.

Since Kerberos requires three entities for authentication, it works as a ticket authorization by a third party, if the system time exceed a certain drift limit, a token created by Kerberos expires after a certain time and the ticket becomes invalid.

Kerberos has also become the standard for websites and SSO implementations across platforms. In Active Directory Domain Services (AD DS), when integrating NAS and other devices for access to network resources, it is necessary to ensure a consistent system time. For logging like syslog, the precise timestamp for the evaluation of the events and for the error analysis are important.